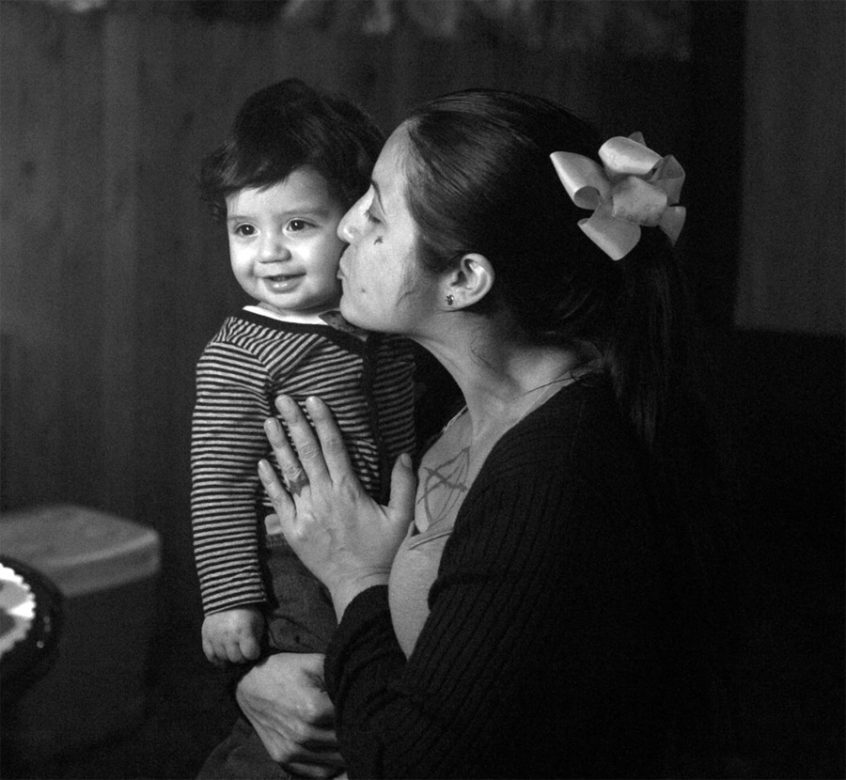 Mercedes Soto, a former gang member who got pregnant after being assaulted, holds her son Samson at their home in Edinburg, Texas. She tried to self-abort through pills, toxic teas, and other methods, but none worked. Still seeking an abortion, she went to the McAllen Whole Woman’s Health abortion clinic when a pro-life sidewalk counselor convinced her to keep the pregnancy. She has since become a pro-life activist, taking Samson and his sister Delilah to abortion protests.

Soto, 33, abused and molested as a child, ran away from home at age 16, earning money as a tattoo artist and getting heavily involved with drugs. She married Orlando Sanchez when she was 17 and moved with him to Pennsylvania for a year so he could finish college. When they returned to McAllen, Soto reentered the drug and tattoo scene, to her spouse’s dismay. Still, they stayed married for 14 years, having two children, a son and a daughter.

But three years ago, Sanchez filed for divorce, tired of Soto’s wild living, which included her membership in a street gang. She moved in with her mother, and the kids mostly stayed with their father. One night, members of a rival gang raped Soto. The assault left her suicidal. She moved into a women’s shelter as police pursued her attackers.

Three of the four men were eventually convicted — the fourth fled to Mexico — but none of them did serious time, said Soto, a fact she is still angry about. She has her own rap sheet, six misdemeanor convictions for crimes like theft, misuse of a credit card and driving while intoxicated.

When Soto discovered the rape had impregnated her, she tried to self-abort, taking misoprostol pills she was able to get without a prescription. She drank toxic teas. She even had fellow gang members punch her in the stomach.

“I was broken,” she said, sitting in her modest home, with walls that bear a collection of religious iconography. “The devil had a hold of me.”

When none of that worked, she made an appointment at Whole Woman’s Health, sobbing as she walked in for her counseling and sonogram. On the way in, a protester, a woman who runs a nearby crisis pregnancy clinic, caught her eye.

“She said Jesus loved me, that I didn’t have to kill my baby,” said Soto, an animated woman who cries often as

Back in her living room, Soto bounced Samson on her knee.

“If I can keep my baby after being gang raped, anyone can,” she said. “You got pregnant on a bad date, or with somebody you love? There’s just no excuse. If you lay with a man and get pregnant, that’s your fault. To murder your unborn baby is a sin against humanity.”

This article and photos appeared in the San Antonio Express News: http://www.expressnews.com/abortion-in-an-altered-texas-landscape/